Although most children with Developmental Language Disorder (DLD) do not develop mental health problems, they are at greater risk compared to their typically developing peers.

Ultimately, the goal of any intervention for children with DLD is to improve wellbeing and that means we should be thinking about how interventions can promote good mental health. However, in order to design interventions that do this, we need to understand why language competence is associated with mental health.

In the SCALES study, we are exploring a number of different mechanisms that might explain the relationship between language and mental health. One of these potential mechanisms is emotion recognition.

Emotional recognition is vital for navigating social situations and regulating our own behaviour, and therefore key for good mental health. For example, if someone looks angry we might change the way we engage with

her and if we are feeling angry, we might take time out or count to 10 to avoid conflict.

A major question for scientists is to what extent having labels for emotion helps us to learn about emotion categories. For instance, we may perceive that happy and angry faces look different, but does knowing the word ‘angry’ speed up that recognition? Or help us to distinguish between more similar expressions, like angry versus disgusted?

Language for emotions may be particularly hard for children with DLD because it describes abstract concepts and is often non-literal (“feeling blue”). Problems deciphering the language for emotion may lead to problems developing good emotion processing skills, which in turn may impact mental health.

When the SCALES children were in Year 6 they completed two tasks to measure their emotion recognition. In one task they saw pictures of people’s faces with happy, sad 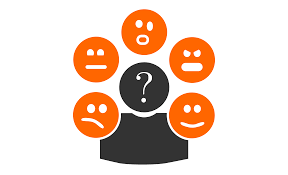 , surprised, scared, disgusted and angry facial expression. In the other they heard vocal sounds for the same emotions (e.g. crying for sad). After each face or sound they were shown 6 different emotion labels and asked to select the one that matched the face/sound.

This is the largest study to date to demonstrate that as a group, children with DLD have problems with emotion recognition and that these problems are specifically associated with language ability (rather than cognitively ability more generally).

We recommend that emotion recognition and particularly the language of emotion, should be included as targets for intervention for children with DLD. SCALES has shown that language competence is highly stable, meaning that it is challenging to intervene to change a child’s trajectory of global language development. A better strategy might be to target language skills that are vital for social, emotional and mental health, such as the language of emotion.